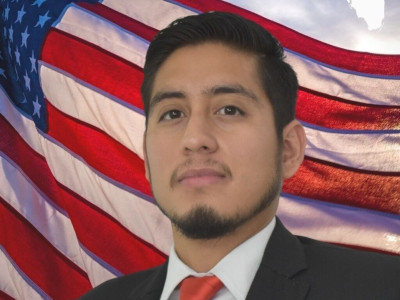 Hello Patriots,
Our next meeting is Saturday, January 8th
Location: MOOSE LODGE
601 W. Granada Blvd
Ormond Beach, FL 32174
Time:    Social starts at 11:00 am
Invocation and Allegiance to the Flag starts at 11:30 am
Lunch served at 11:45 pm
Official meeting starts following lunch approximately 12:15 pm….depending on how fast lunch proceeds.
Invitation by RSVP only!
Our Meeting is open to all “CONSERVATIVES” truly concerned about our Republic.

Luis Miguel is running for Florida’s U.S. Senate seat in the 2022 election, challenging Marco Rubio in the Republican primary.

He is a husband, father, Christian, and constitutionalist patriot who believes in limited government and restoring our government to the principles established by the Founding Fathers.

Luis is a full-time contributor to the New American magazine, one of the nation’s most prominent non-establishment conservative publications. His writings and video appearances expose the Deep State, globalism, the anti-Christian agenda, and communist infiltration in our society. Luis has written for other popular conservative outlets, including BizPac Review and Mad World News.

Prior to joining the New American full-time, Luis worked at the creative department for Majority Strategies, one of the country’s top political consulting firms, where he developed advertising campaigns for popular conservative figures like Sen. Ted Cruz, Sen. Marsha Blackburn, and congressional candidate Kim Klacik.

Luis is heavily involved in conservative activism in his local community. He has worked closely with the St. Augustine Tea Party.

Luis was elected District Chairman of the St. Johns Republican Party and served in that capacity through the 2020 election, leading grassroots get-out-the-vote efforts on behalf of President Trump and other GOP candidates while simultaneously serving as the county party’s communications director.

Due to his writings and insights, Luis has regularly been tapped to speak on a variety of conservative radio programs, including Bill Martinez Live, The Daily Review with Keith Hanson, and Focus Today with Perry Atkinson. He has been featured on Florida Politics, the Tallahassee Democrat, the Independent, and the Palm Beach Post, among other outlets.

Luis lives in St. Augustine, Florida with his wife and three children.